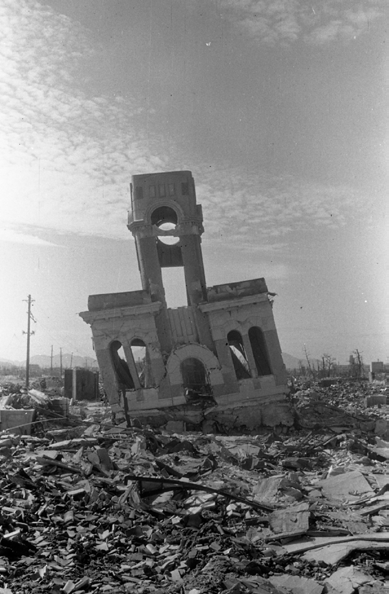 Clock shop crushed and tilted by the blast
Early October 1945 620 m from the hypocenter Hirataya-cho
Photo by Shigeo Hayashi
The first floor of this building was smashed by the blast.
The second floor remained standing, its arched windows and clock tower leaning precariously.

The bomb exploded in the air and generated a shock wave, that is, a fast-moving wall of high-pressure air. This blast pressure was immense. Even 500 meters from the hypocenter, it was 11 tons per square meter.
The blast lifted and hurled people, knocked them unconscious, injured them, trapped them under collapsed buildings, or crushed them to death. Most wooden houses within two kilometers of the hypocenter were destroyed. Although ferroconcrete structures remained standing, the blast shattered windows, blowing countless shards of glass into bodies.

Contents
1 Effects of Blast on Buildings