5-3-3-1Treaty on the Non-Proliferation of Nuclear Weapons 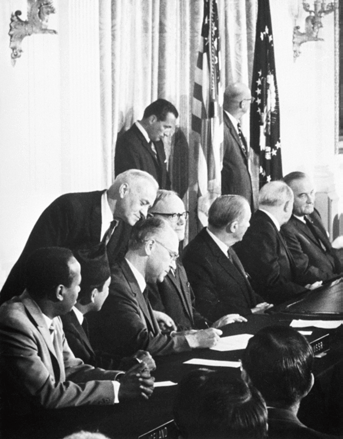 The Nuclear Non-Proliferation Treaty (NPT) accepts five countries—United States, Soviet Union, United Kingdom, France, and China—as nuclear-weapon states. It prohibits other signatory states from developing or possessing nuclear weapons, and obligates the nuclear-weapon states to negotiate in good faith toward nuclear disarmament. In 1995, the treaty was extended indefinitely, with review conferences to be held every five years. Simultaneously, the states parties to the treaty adopted a document regarding the Principles and Objectives for Nuclear Non-Proliferation and Disarmament. Regarding nuclear disarmament, this document called for completion of negotiations for the Comprehensive Nuclear-Test-Ban Treaty (CTBT) by 1996, the immediate start and quick conclusion of negotiations for a Fissile Material Cut-off Treaty, and efforts by the nuclear-weapon states toward the total abolition of nuclear weapons.