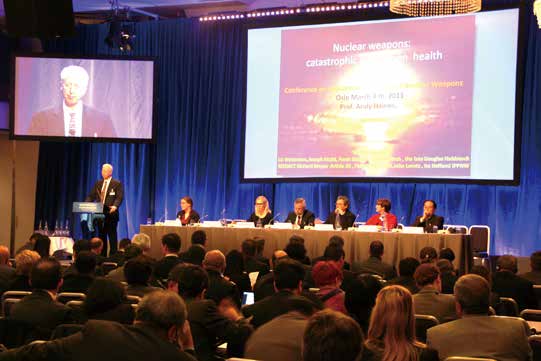 Conference on the Humanitarian Impact of Nuclear Weapons

The atomic bombings of Hiroshima and Nagasaki thrust the world into the nuclear age. Tensions between the United States and the Soviet Union (now, Russia) led to a nuclear arms race and production of vast numbers of nuclear weapons. The concomitant nuclear tests have exposed countless people to radiation.
While the United States and Russia have reduced their nuclear arsenals since the end of the Cold War, the number of nuclear-armed states has increased. Moreover, the world now faces the threat of nuclear terrorism and related crises. Given the inhumanity of nuclear weapons, the international community must cooperate to promote nuclear disarmament, continue negotiations to encourage all countries to join the Treaty on the Prohibition of Nuclear Weapons, and achieve at the earliest possible date the total abolition of nuclear weapons.