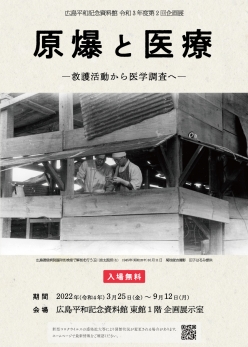 During the war, doctors and other medical personnel were obliged to cooperate in the war effort under various laws and regulations. The Air Defense Law required doctors to engage in relief activities in the event of an air raid. As air raids by the U.S. military on the Japanese mainland intensified, doctors were on standby at relief stations each time an alarm was issued.

When the city of Hiroshima was devastated by the atomic bombing, it is estimated that 91% of the doctors in the city were affected. Although it became difficult to carry out the relief activities that had initially been planned, the surviving doctors treated victims despite their own injuries. Units belonging to the Army Marine Headquarters (known as the “Akatsuki” Corps) stationed in Ujina and rescue teams that had rushed to the area from different regions of the country were engaged in relief activities. Victims were taken in hospitals and schools in the surrounding areas of Hiroshima City.

As the days passed, the doctors who treated the victims were faced with radiation-related symptoms such as vomiting, fever, and diarrhea. At first, it was not even known that an atomic bomb had been dropped, but the surveys conducted immediately after the bombing helped the doctors seek effective methods of treatment.

Meanwhile, the United States also conducted investigations on the effects of the atomic bomb on human bodies. A Japan-U.S. Joint Commission was organized and conducted a survey in Hiroshima from October to November, and the reports were compiled the following year.

This exhibition traces events relevant to the atomic bombing and the medical care through the items of the collection of the Hiroshima Peace Memorial Museum, photographs taken at the time, records left by doctors, and other materials. We hope that this exhibition will serve as an opportunity for visitors to learn about the struggles of the doctors of that time. They committed to treating the victims and getting the picture of the patients’ symptoms under the difficult situation with inadequate equipment or medical supplies.

2. Dropping of the Atomic Bomb: Relief and Rescue Activities amid Turmoil

3. Gradual Onset of the Symptoms Caused by Radiation

2 The Number of the Exhibits