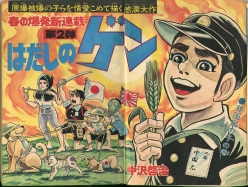 The first half of Barefoot Gen ran as a serial in the Weekly Shonen Jump manga magazine, appearing in 59 issues between June 1973 and September 1974. Each issue featured an elaborate illustration on the inside cover of the magazine, called a frontispiece, alluding to that week’s contents. When Barefoot Gen was published as a series of books beginning in 1975, these frontispieces were not included. In 2011, 45 of the original frontispieces were included in the Nakazawa collection donated to the city of Hiroshima. These frontispieces have been carefully reproduced and are introduced, bringing to life the Hiroshima of Barefoot Gen.