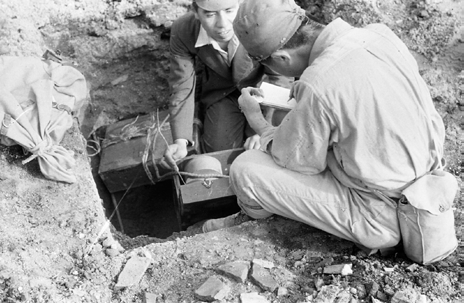 Soon after the atomic bombing, military personnel stationed in Hiroshima conducted field surveys to ascertain the nature of the bomb and the damage and recommend countermeasures. Beginning on August 8, survey teams from the Cabinet, Imperial Headquarters, and university researchers commissioned by the Army and Navy were dispatched to Hiroshima. On September 14, a Special Committee for the Investigation of the Effects of the Atomic Bomb was established in the Ministry of Education's National Research Council of Japan. It comprised nine subcommittees, each to conduct specialized research in physics, biology, medicine, and other scientific fields. Meanwhile, in early September, the United States began dispatching survey teams to conduct medical surveys on the bombing victims, survey building damage, and so on.

5-2-1 The Atomic Bombs Dropped on Hiroshima and Nagasaki